The Turkic Languages: What Are Their Similarities and Differences? 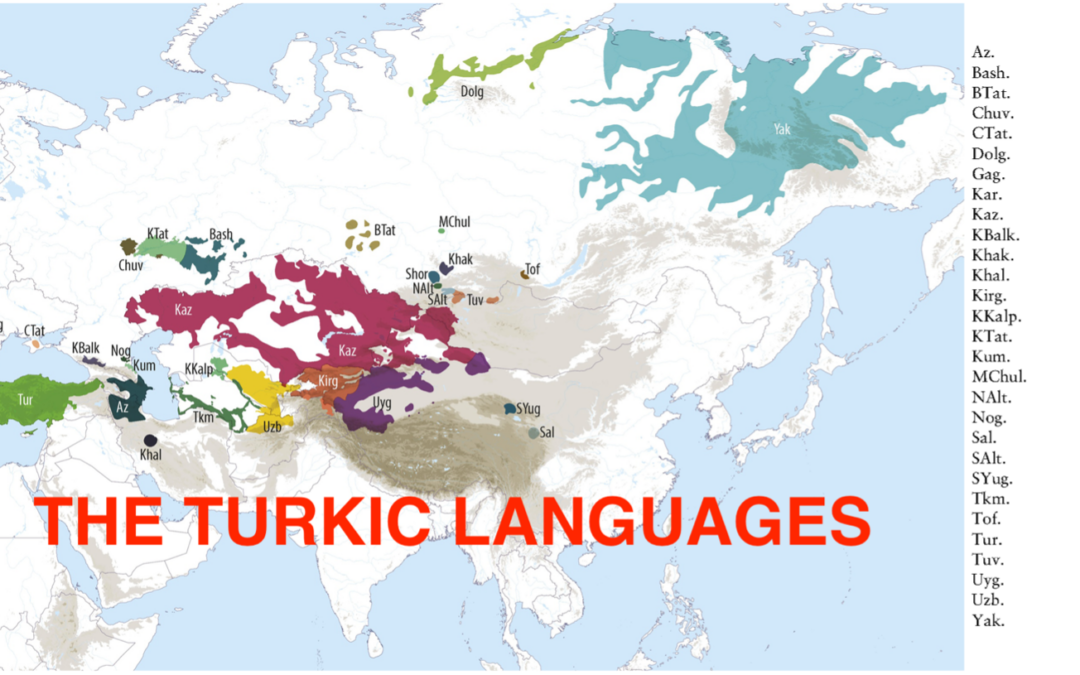 Regarding syntax, all the Turkic languages use the SOV (subject-object-verb) word order, however if an adjective is used to describe a noun, it precedes the noun in the order of the sentence. For example, the Turkish proverb “Ağır kazan geç kaynar” (“the heavy cauldron takes longer to boil”, meaning “great things are done slowly”) ends with the verb “kaynamak” (to boil) and begins with the adjective “ağır” (heavy) followed by the subject of the sentence “kazan” (kettle). The translation of this proverb in other Turkic languages, like Azeri, Turkmen or Kazakh, follows the same word order rule: “Ağır qazan gec qaynayar” (Azeri), “Agyr gazan gic gaýnar” (Turkmen), “Awur qazan keş qaynaydi” (Kazakh).

Turkic languages are also agglutinative languages. This means that some words in the Turkic languages are formed through the morphological process of agglutination through which different words are combined to express a single meaning. In the Uzbek language, one might hear or see an agglutination like “tushunyapsizmi”, which translated to English literally means “understanding-you-do-?”, or “Do you understand?”. The compound phrase “tushun-yap-siz-mi” is formed by the combination of the morpheme “yap” (“-ing”), the verb stem “tushun-“ (to understand”), the singular  informal pronoun “siz” (“you” ) and the question mark, “mi”.

The Turkish language also underwent many different alterations as part of the reforms introduced by Kemal Atatürk, the first President of Turkey. Starting in 1928, the Turkish script, influenced by Persian and Arabic, was latinised and replaced with a new Latin alphabet which now constitutes the Modern Turkish language. After the dissolution of the Soviet Union in 1991, some of the former Soviet countries such as Kazakhstan, Azerbaijan, and Turkmenistan have used the Latinised Turkish alphabet as the basis for the Latinisation of their languages.

The Oghuz, Karluk and Kipchak languages, such as those spoken in Turkey, Uzbekistan, Turkmenistan, and Kazakhstan, all utilise a Latin script. Nonetheless, there are variations in the different scripts used within the different language groups. In the Oghuz group, the Azerbaijani language uses a Perso-Arabic alphabet instead of Latin. Moreover, in the Kipchak group, the Kyrgyz language uses the Cyrillic alphabet. Contrastingly, the Siberian Turkic languages, which are mainly spoken in Russia, use the Cyrillic alphabet.

The Turkic languages share some mutual intelligibility through similar vocabulary, a shared syntax order and other phonological similarities, like vowels, but it would be wrong to assume that every Turkic language is the same, especially if you are an interpreter or translator. One should recognise that within each Turkic language there are individual characteristics, such as different scripts, like Arabic, Cyrillic or Latin, or different historical contexts or influences, such as the influence of the USSR on Soviet Turkic languages. If you require translation or interpreting services in any of the Turkic languages, or any other language, you can get a quote here from Crystal Clear Translation.